Harkin is on a multi-city tour of disaster areas. They’re not hard to find in Iowa right now. Of Iowa’s 99 counties, 83 are declared state disaster areas. Many of those have also received federal designation.

Ottumwa, where the river is still at more than 16.5 feet, was the third stop after Parkersburg and Oskaloosa. Levees and sandbags controlled the river within Ottumwa city limits, but there are some hard-hit areas just outside town.

Harkin stood for several minutes by a pump in the Market Street parking lot, where a huge mound of sand still sits ready for bagging should the river defy expectations and rise again. Public Works Director Larry Seals had a specific request for the senator’s help.

In a conference call with Iowa reporters, Harkin described a bill that would raise funding for biomechanical research by $1 billion, boost appropriations for child health centers by $150 million, spend $50 million more to address a backlog in Social Security disability claims, increase funding for colorectal exams for low-income persons by $25 million and raise allocations for school repairs by $6 million.

Harkin said the bill passed a Senate subcommittee without a dissenting vote and he expected full committee passage.

Iowa will emerge stronger than ever 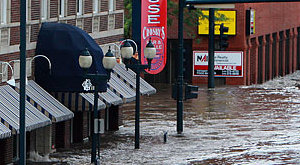 My thoughts and prayers go out to the tens of thousands of Iowans around the state who have had to evacuate their homes and businesses due to the severe weather damage and record flooding in communities and neighborhoods across our state. In addition, my heart and my sincere sympathies go out to the victims, families and friends of the boy scouts who were affected by the tornado that swept through the Little Sioux Scout Ranch near Turin.

June 10 (Bloomberg)—The Bush administration increased its budget request for the U.S. Food and Drug Administration by $275 million after the agency’s commissioner told Congress that more funding was needed to protect against unsafe products.

Lawmakers have criticized the FDA’s performance after the blood thinner heparin was found to have a contaminated ingredient from China. The FDA commissioner, Andrew von Eschenbach, wrote a letter last month to Senator Arlen Specter, Republican of Pennsylvania, saying the agency needed $275 million to beef up inspections of manufacturers.

Harkin, who is seeking his fifth Senate term, said he expects Obama and other Democrats to fare well in a general election he speculated could see the party’s largest gains in more than 30 years.

“It sure feels that way. It feels a lot like when I first came in in 1974, when I won that Republican district out in southwest Iowa,” said Harkin, referring to his first of five House terms. “We brought in 75 Democrats that year and it feels a lot like that now, in terms of registration, people who are saying they want big change.”

Sen. Tom Harkin announced Friday that the Iowa Department of Transportation received $226,308 to work on approaches for the new U.S. Highway 34 bridge, including work on the U.S. 34 and Interstate 29 interchange in Mills County.