Thank you for participating in Senator Tom Harkin’s “Building Blue” competition. We are happy to announce the winners of our contest as decided by more than 5,000 Iowans from all over the state who made their voices heard by voting for their favorite State Senate and State House candidates. 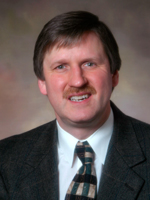 Eric Palmer is serving his first term in the Iowa House of Representatives. He is vice chair of the Judiciary Committee and also serves on the Education, Human Resources, Ways and Means and Labor committees, as well as the Health and Human Services Budget Subcommittee.

Eric served two terms on the Oskaloosa City Council. His wife, Laurie, is a member of the school board. They have four children: Nicholas, age 12; and triplets Blake, Collin and Tori, age 10.

Eric was born and raised in Oskaloosa. After graduation from high school, he attended William Penn University and later Drake Law School.

Eric has practiced law in Oskaloosa for the last 20 years. Early in his career, he worked as a part-time judicial magistrate for 3 1/2 years.

Eric’s family attends First Christian Church/Disciples of Christ, where Eric has been an elder, the treasurer and a deacon.

Eric serves as the treasurer of the Nelson Trust for the Mahaska County Historical Society. He is a member of the Kiwanis and the Mahaska County Democrats. He has formerly served on the boards of the Oskaloosa Municipal Housing Agency, the Oskaloosa Kiwanis Club, the Red Cross, the William Penn University Alumni Board, the Hospice Board, Kids Korner and the Mahasksa County Sesquicentennial Commission. He was the state legal counsel for the Jaycees. 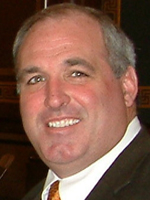 Tom Rielly is in his first term in the Iowa Senate, serving district 38. Tom was born and raised in Oskaloosa and returned with his wife, Mary, after college. Tom and his wife have two daughters: Katie and Shawn.

Senate District 38 encompasses all of Keokuk County, as well as parts of Mahaska, Poweshiek, and Iowa Counties.

In the Senate, Rielly serves as the Chair of the Transportation and Vice Chair of the Agriculture committees. He also serves on the Commerce, Economic Growth, and Local Government committees.

Rielly graduated from Loras College in Dubuque, Iowa. He is the former Mayor of Oskaloosa. He currently owns Rielly Insurance and Financial Services, where he specializes in insurance, financial services, financial security planning, and business and estate succession planning.

He is very active in the community and is a member of the Elks Lodge, Knights of Columbus, Eagles Lodge, National Association of Insurance and Financial Advisors, and a member of the Oskaloosa Area Chamber and Development Group.

Congratulations to both of our winners!