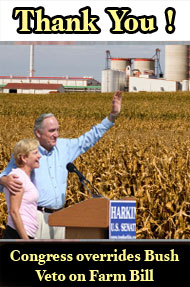 The United States Senate joined the House of Representatives by voting 82 to 13 today to override President Bush’s veto of the Food, Conservation and Energy Act. The bill to provides a safety net for all of America’s food producers, increases funding to feed our nation’s poor, enhances support for important conservation initiatives, and helps make America more energy independent.

“The president tried to send a message with his veto of The Food, Conservation and Energy Act, but today, in the second veto override of the Bush Presidency, Congress sent an even stronger message back: this veto will not stand in the way of critical farm, food, conservation and energy investments becoming law. Not only did this bill pass both chambers with an overwhelming majority, but with the override votes, we held our majorities. This proves we have a good, strong, bipartisan farm bill. And after all of our hard work, it is a proud result for Congress as their critical legislation becomes law.”