On Monday, September 1st, Senator Harkin attended the Debuque Labor Day parade where he walked with supporters and greeted constituents along the parade route.

THonline.com had a full right up of the days events:

“Labor Day is a day that we honor that group of Americans that really built the middle class in this country,” said Sen. Tom Harkin D-Iowa, speaking to media before the parade. “I often joke that if you look up ‘middle class’ in the dictionary, you’ll find ‘see organized labor.’”

Harkin, clad appropriately in a blue-collared shirt, walked the parade route between representatives from several other campaigns.

The senator said labor is an issue that’s close to his heart—his father was a coal miner and his brother a member of the postal worker’s union. It’s important to acknowledge past battles Advertisement for an eight-hour work day, pensions and overtime pay, he said.

“All the things we take for granted today as part of the workforce, it was organized labor that fought, many died, for this,” Harkin said.

Below are a few pictures from the parade.

Senator Harkin and his supporters pose for a picture during the Dubuque Labor Day Parade. 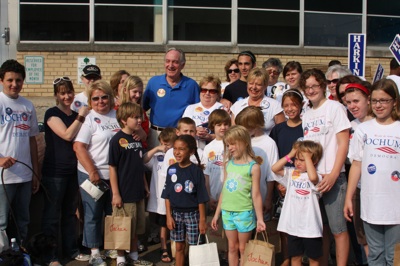 Senator Harkin with some of his younger constituents.

Senator Harkin and his supporters walk the parade route.