Up All Night with Sen. Tom Harkin

During a break in tonight’s “all-nighter” in the United States Senate, I was able to catch up with Senator Harkin outside the Capitol Building where he was able to write down a summary of his remarks and film a short video blog for DailyKos, MyDD, and BleedingHeartland which you can read and watch below:

Earlier tonight, I stood on the floor of the Senate to show my support for our men and women in uniform by trying to bring them home.

As you know, the Senate held a rare all-night session because Republicans are filibustering our efforts to get an up or down vote on re-deploying our troops out of Iraq. 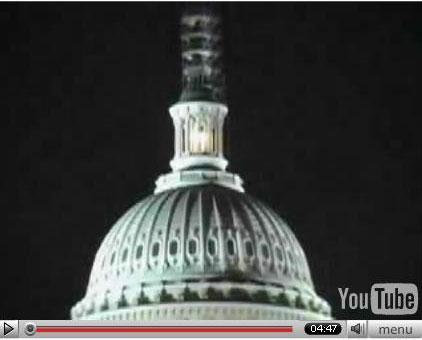 In an extraordinary display of fealty to President Bush and his failed Iraq policy, Republicans are literally refusing to allow a vote on an amendment to bring home our soldiers and reduce the U.S. involvement in Iraq.

The American people deserve to know where every Senator stands on the most important issue facing Congress. We must not allow Republicans to block an up or down vote with procedural semantics.

I wanted to make sure my colleagues knew where Iowans stand on the issue. So earlier tonight, while on the floor, I read some letters that I have received from Iowans, including Iowa soldiers and their families.

I hope that this one sleepless night in the U.S. Senate will awaken Republicans to the reality that their loyalty belongs not to the President, but to the American people.

Sorry, Senator, but not strong enough.

Don’t use words like “refusing to allow” a vote, or “won’t give us an up-or-down vote” (as you said in the video I saw on firedoglake.com).

The correct word is “afraid.” The Republicans were AFRAID to have a vote. They hid behind procedure because they knew they would lose.

This stuff is important. And it still is. Last night’s fight is over, but the fight in the media, and in people’s minds, between the true (Democratic) and false (Republican) versions of what happened last night have just begun.

Heck, you’ve got Fox News claiming the amendment “failed by a 52-47 vote.” This is the terrain we’re fighting on.